The Kiwis are a resourceful bunch, and we've discovered that they really enjoy do-it-yourselfing. But, like us, they prefer doing it themselves with a touch of ease. We've gotten on the bandwagon of just a couple of the things that the locals are making for themselves.

Our first foray into this territory was my Christmas present (as in it was near Christmas, and I wanted it more than Steven) -- a Sodastream brand water carbonator. You can get these all over the world, and they seem kind of dumb but it turns out they are fantastic. 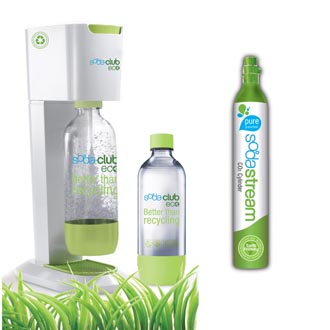 If you like soda, or even more so if (like me) you like fizzy, but not too fizzy, water, this is a great buy. For $100 kiwi dollars (about $75 CDN) you get the contraption, a CO2 canister and two 1L hard plastic bottles. You fill the bottle with tap (or in our case, dock or desalinator) water, stick in in the thing, push a button for a second or two and voilà! Bubbly water.

You can also get soda syrups to add after the fact to make reasonable facsimiles of the usual soda flavours, plus some more unusual ones. We have cola, raspberry, tonic and ginger beer syrups on board, though 9 times out of ten we just drink the bubbly water. It uses no electrical power and you can control the amount of carbonation as well as the concentration of syrup. We both like our pop lighter and less fizzy than commercial preparations, so it's great. Oh, yeah, it ends up costing a lot less, too, not to mention saving on carrying bottles of pop around.

After our success with the Sodastream, and on the advice of our friends on Clara Katherine, we took a much bigger step. We started brewing our own beer. We bought a started kit with included a fermenter (hereafter called the beer bucket), bottles, some assorted gear (sterilizers, an airlock, a mixing paddles and hydrometer) and the consumables to make our first beer. Here in NZ they sell "beer kits" which are tins of liquid malt and flavourings, yeast and dextrose. For about $15NZ you can get all the fixings for a basic beer at the grocery store, and for about twice that you can be making premium brews. We, beer snobs that we are, mostly go for the premium brews. Our first attempt was a brown ale (Whangarei Brown*), and we were blown away at how good it is. For about $30NZ we got 22L (that's 30 750 ml bottles) of a beer that was better than the stuff we'd been buying at the store. We next tried a more expensive stout kit, which was $50NZ, only made 16 L and was worth every penny. The Red Star Stout* was reminiscent of Lighthouse Brewery's Keeper's Stout and while it was more fiddly to make, it is a treat of a beer. Finally we bought a grocery store brand kit for a NZ Draught (akin to a Canadian Amber Ale), and we were amazed at how tasty it was at only $15 for 22L. The Deputy Draught* is an easy drinking lighter beer, not unlike the Tui were were drinking before we starting brewing our own. It will be good for the hot afternoons in the tropics.

We have now stocked up on beer kits, two of each kind, so that we can be economically brewing our own as we move around. And the beers we make beats drinking the local lagers by a long shot.

*All names were made up by us and refer only to the products from the Scream Brewery.

Cruising on a limited Budget