The base fact of cruising budgets is that most boats spend all of the money that they think that they can afford. From the other cruisers we've spoken with, the thinnest budgets for a cruising couple on the smallest ocean-going boats are about $1,000 per month. These boats are eating whatever is cheapest, doing a minimum of boat maintenance, and spend very little on activities. Ninety percent of boats spend $2,000 per month or more. Half the fleet spends $4,000 per month or more. All of these are operating budgets for a boat that was at least moderately well-equipped for offshore passages. (To be explicit, any finance costs for buying and refitting the boat are in addition to these figures.)

Many boats have "smaller" budgets by excluding categories of spending that we include. Many boats exclude periodic refits from their budgets. Sails, lines, rigging, batteries, anchors, chain rode, canvas, and even engines will all need replacing eventually. Our budget also includes all the money that the crew spends ashore, from new clothes to pints of beer. To make the point, the only expense that we exclude is bank charges (which were probably about $30 last year).

Living on a small budget is hard work. We do everything that we can for ourselves. We repair our own sails, canvas, and clothing. We do our own plumbing, electrical, painting, and even some engine maintenance. We bargain hunt and wait for sales. All this and we still have to regularly deny our impulse purchases.

I believe that a detailed discussion of how we spend our cruising budget will inform others on the costs of cruising. So here it is.

We divided our budget as follows: 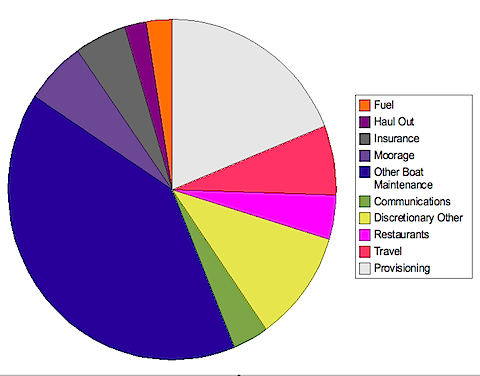 Please note that all costs are Canadian dollars, which have been close to par with US dollars this year.

Provisioning in Polynesia has been more expensive than it was it Latin America. This has to be balanced against the greater quality and variety of provisions. Our food costs are up by about 1/3 this year over last, which reflects the general increase in prices.

There are places in Polynesia where the provisioning is not great, but in most places it is better than it is in Central America. The towns in French Polynesia have grocery stores with a good variety of food at reasonable prices, with cheap baguettes and cheese. Papeete has one of the best stocked groceries I have ever had the pleasure of visiting. Prices are very good in Samoa, so stock up on durable items, like coffee. Groceries are reasonable in New Zealand, if you can get into a city, like Whangarei.

Alcohol is expensive in the South Pacific. Prices are highest in French Polynesia, but remain well above US or Latin American prices everywhere. Samoa is probably your best place to stock up. We have taken to brewing our own beer, both to reduce costs and to drink something other than lager.

Scream itself was uninsured against damage for six months this year. The crew have health and evacuation insurance, and we have blue water liability insurance. While in New Zealand we have comprehensive insurance, as it is reasonably priced at about 0.75% of the agreed value per year. Comprehensive offshore insurance is too expensive for us, with a recent quote of $4,300 with a $5,000 deductable.

We travelled fewer miles this year, and sailed most of our distance, which accounts for our reduced fuel costs. As most boats motor more than we do, I still recommend a fuel budget of $0.01 per horsepower for every mile of planned travel, sail or powered. I'll also take this opportunity to point out that we have neither a generator nor an outboard. I recommend that any boat that carries gas for its outboard should have a small portable generator, as those are much cheaper in the long run than using your engine for electricity.

We spent 60 days on docks and another 80 days on moorings this year, which accounts for the large increase in this budget. Most boats that we know spent considerably more time on docks than we did, and spent more money on them. I think that 80% of the boats spending cyclone season here in New Zealand paid for a dock for 120 or more days, so their expenses are double, or more, than ours in this area. Many of those boats also purchased cars, adding those costs.

We hauled Scream about 20 months after her last haulout. This time we did the painting ourselves, which saved a lot of money, but all of the costs were much lower in New Zealand than in Costa Rica. We hope not to haul this coming year.

Our big expenses this year have been in periodic maintenance and replacements. We bought a new main sail, repaired the other sails, and bought a new stack pack, all for about $4,300. We have an almost new life raft which cost only $1,100. Replacing our EPIRB battery, flares, and ditch bag cost another $600. Regalvanizing the chain and anchor were another $650 and finishing the mount on the wind generator was $700. Most of the remainder of the budget is a $2,100 repair to our transmission.

We did not fly home this year, which reduced our travel expenses considerably. Our major travel expense was a camper van trip round the south island of New Zealand.

Our restaurant costs were surprisingly low, mostly because we are short on available cash.

In Latin America we did not have a cell phone, nor did we ever pay directly for internet as its cost was often built into moorage. For this year we have had to pay for internet, and we have had a cell phone here in New Zealand. Internet in French Polynesia is mostly terrible, and is terribly expensive. Internet elsewhere in Polynesia is better, and is great in New Zealand. However, it is always metered and is more expensive than it is in Canada.

The remaining expenses are much higher than in the previous years. We did buy four pairs of prescription eye glasses, but otherwise I have no good explanation.

Our goals for 2011-2012 are to cruise the South Pacific for six months, then wait out another cyclone season in New Zealand.

After three years of level budgets (and overspending) we think that we will enjoy ourselves more if we increase the budget from last year, and we think that we can afford it. So this year's budget will be:

We hope to have far fewer major expenses this year, and to pay down last year's deficits so that the two-year total is on track for our new long term target of $28,600 annually.

The keys to controlling costs are having a small boat and being self-sufficient enough to live at anchor.

If you want your budget to be much less than ours, you either need a smaller boat (Scream is 45 feet) or you need to cruise in less expensive areas (Latin America comes to mind). If you have more money, count yourself lucky.

6 thoughts on “Cruising on a limited Budget”